The cord that connects my camera to the computer is somewhere in Reykjavik Harbor -- whoops -- so I'm going to plunder photos for this entry. 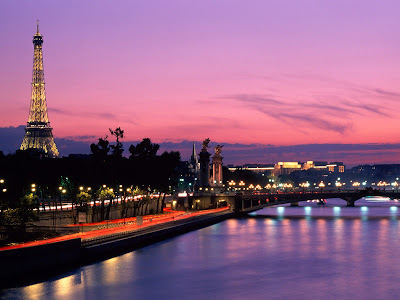 Some of the stereotypes are real.


When I landed, I got to go up to the control tower at Charles de Gaulle airport, and the air traffic controllers (who were a bunch of clowns) had snacks laid out for their morning shift.  Brioche, nutella, confiture framboise in a little artisinal jar -- it could not have been more French if it were wearing perfume. 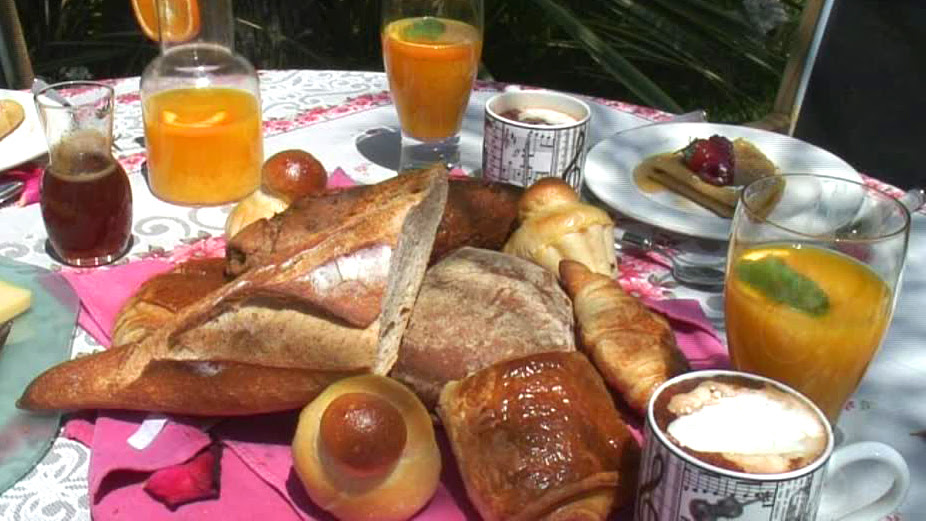 The French have a lovely but sometimes exhausting approach to eating.  Every meal is an event.

For breakfast this morning I had eggs, cheese, jam, and bread.  I had to go to three stores.  The eggs and jam at the market, the bread from the bakery, and the cheese from the fromagerie, which is a shop that sells cheese.  Just cheese.

Borges said that heaven must be some kind of library, but I think it must have a fromagerie attached.

Throw that on a fresh baguette, and what more could you want?

(My host slash cousin Jacques, who is a real mensch, now tells me no no no, it's the wire that cuts butter.  Because, unbelievably, that's a different word.)

I have to cut this short, because typing on this azerty keyboard is genuinely exhausting.  But one last thing I just love.

At Pere Lachaise cemetary, where Oscar Wilde was buried (omg I love that man), many of the tombstones have the same striking word. 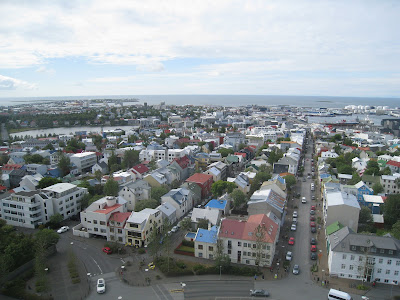 Reykjavik is also very, very white -- the most common ethnic minority is Polish -- so my travel buddy Anjeni gets some fantastic stares from kids.  Anj flew back to Chicago today.  She will be missed. 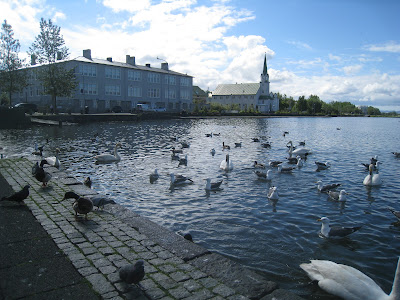 Yes, I know ducks from pigeons and swans and gulls, but the ducks here are stupendous.  Tjornin Park in the photo above has a sign about feeding ducks.  The sign instructs you to jump up and down to scare away the gulls so you can feed the ducks in peace.  I love that.

Will you get a load of this duckÞ!  (It´s an Eider duck.  Their down is mighty expensive.) 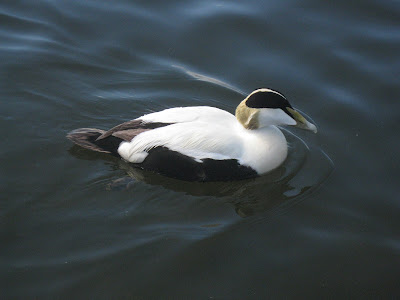 Okay, so where the question mark should be, you have a þ in Iceland.  It´s a letter called thorn, and we used to have it in English.  We dropped thorn for 'th', so the god Thor here is written Þor.  (It´s specifically the th in thing or thrice.  The th in weather or the is a different letter, ð.)  I saw a sign for the Mikka Maraþon.  It´s run by maraþoners.

Also weird: four of our weekdays are named after Norse gods -- Tyr, Odin (aka Woden), Thor, and Freya. (The other three are Saturn, Sun, Moon.)  When Iceland converted to Christianity in 1000AD, it dropped the Norse weekdays.  So we have Norse gods in our week, Iceland doesn´t.

One, I love small museums done well, and Reyk does not disappoint.  Even the stairs in the National Museum -- down to the free lockers, a nice touch -- are terrific. 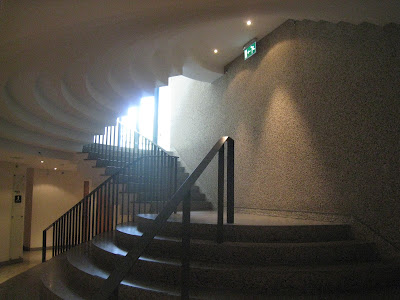 Two, it never gets dark.  Jetlag be damned, you can sightsee whenever your heart desires.  If you can see the clock on this church, it´s 10:40pm. 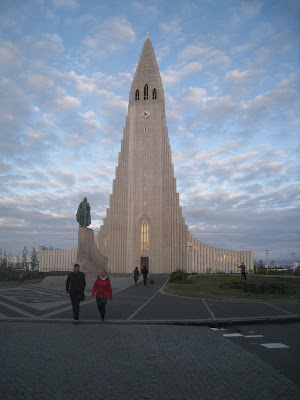 Okay, leaving Reyk.  Anj and I rented a car from SadCars (136,000 miles on it), and took off North, towards the Snaefellsnes peninsula.

You have no idea how small some of these towns are.  Vik, in the south, has 300 people, and it´s a big dot on the map.  Some of the small dots are just a few houses. 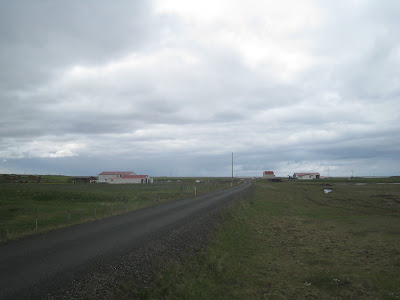 We stayed at the old post office in Grundarfjörðer (this keyboard is just full of fun letters!  Æ µ €) and explored the thousand little waterfalls and cliffs and also I found the reddest little bugs. 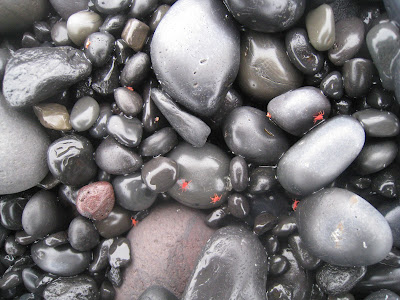 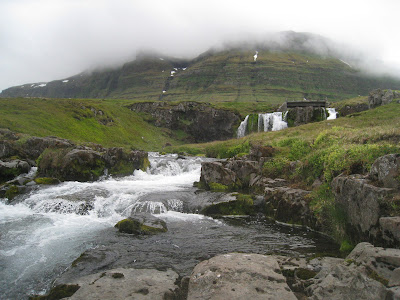 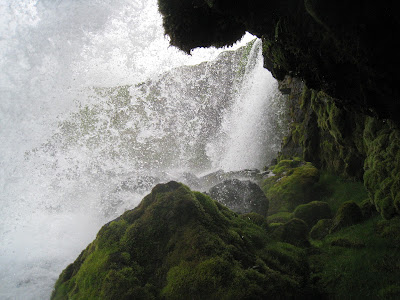 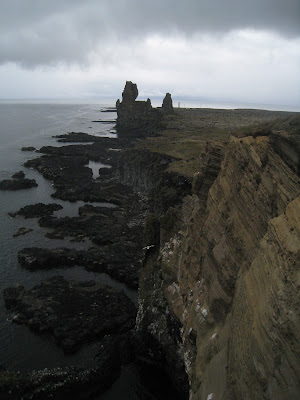 I only realized that last one was a cliff when I was uncomfortably close.  Most of the natural sites in Iceland, even the very famous ones, are still as Earth intended: free, always open, and go at your own risk.  Like a forest.  The way it should be.

Gulfoss, Iceland´s most famous waterfall, is much, much larger than I expected.  And it´s not just a vertical sheet -- it has two tiers at nice contrasting angles, the top like a thousand horseman charging down a slope, and the bottom like a throat. 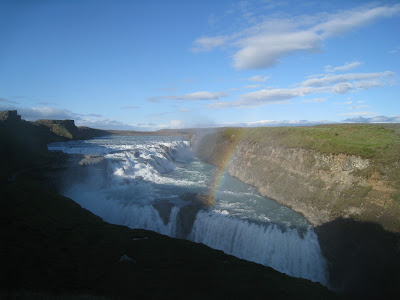 Iceland´s landscapes sometimes remind me of Ireland or Alaska, but some are unlike anywhere else on Earth.  As you drive through the south in particular, it looks like Gaia tried several landscapes before settling on rock and soil and ocean: black endless sand in a gray haze, piles of lava rock carpeted in moss with a misty spray hanging, sheets of water falling from thick skies where you can´t see at all, endless fields of lupins.  These are the prototypes.

And Iceland is where Earth is made.

The North American plate and the Eurasian plate are tearing apart, and new Earth bubbles up from the deep.  Þingvellar National Park is the creation.  You can walk through the split. 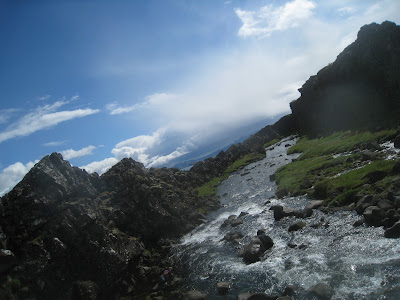 That cold flowing water attracts what I think are the most beautiful ducks on Earth.  Harlequins.  I´ve only seen two before. 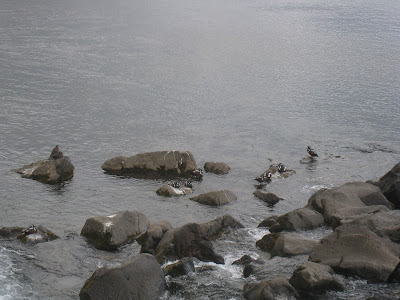 It´s the hot flowing water that attracts most tourists.  Geysir -- the namesake of geysers everywhere -- is not currently active, but its neighbor erupts every few minutes, which means lines of tourists wait dutifully, cameras ready. 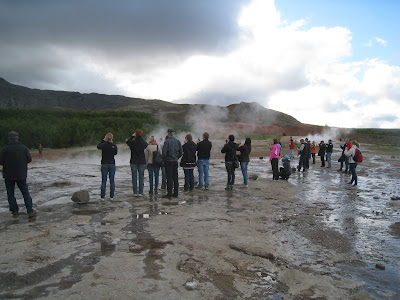 (The first time I tried to take that photo, the geyser erupted just as I was taking it.  I was the only one who had to take another photo.)

The sites are wonderful, no doubt, but most of the charm here is not on a map.  There´s something lovely about a "main road" that is unpaved and full of sheep. 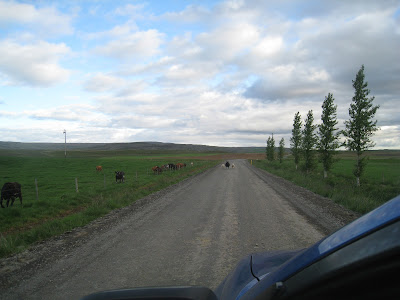 The lupins are as invasive as they are pretty. 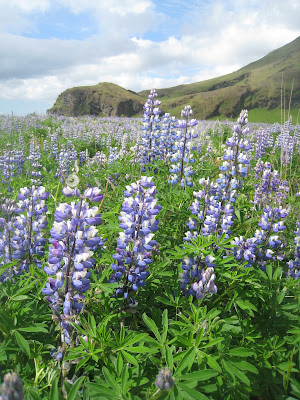 You can get a little waterfalled out, but this one, with the upside-down basalt columns, was terrific.  They´re just like Ireland´s Giant´s Causeway. 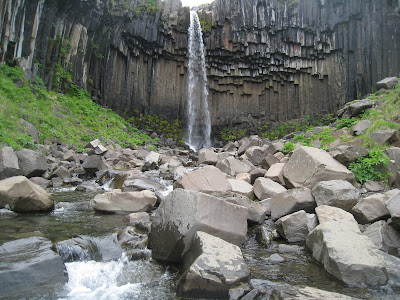 Anj and I drove -- okay, I drove, Anj navigated -- for hours and hours for a supposed must-see bay.  It´s where a glacier retreats and the bay is filled with seals and arctic terns and icebergs. 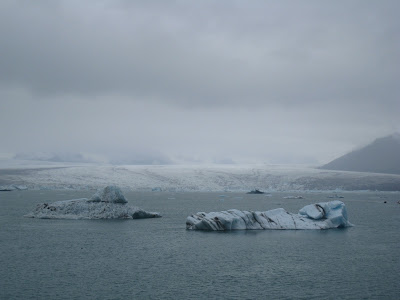 Jokulsarlon is now my favorite place in Iceland.  Just a little bay, in the middle of nowhere, but my oh my. 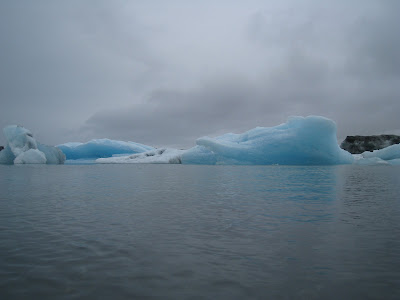 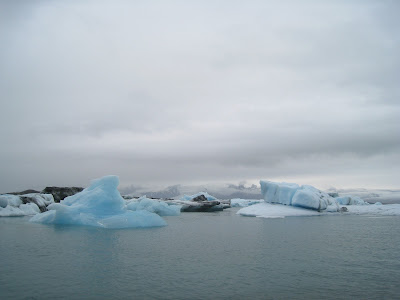 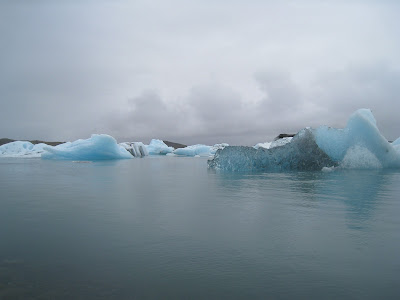 Time to feed the ducks at Tjornin one more time, have some superb haddock stew, and catch my flight to Paris.

Jeanne, good luck in Oregon!  Hi to everyone, and a tiny hi to tiny Jason.
Posted by Jake Cooper at 7:16 AM 5 comments:

I'm all packed up. 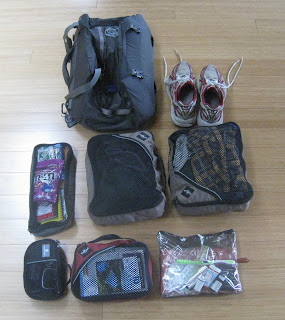 And ready to go. 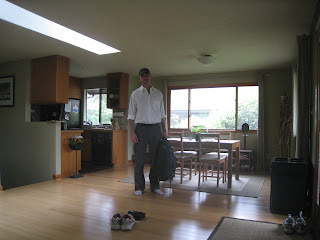 Getting the ol' travel blog out of the attic, dusting it off, and here we go!

The RTW that precipitated this blog -- a 4-month trip in 2008 -- was a quit-your-job-and-go plan.  Now, 4 years into my PhD program, I'm taking a summer quarter off to travel.

Yes, summer is the best time to be in Seattle.  Yes, I have a lot of work to do.  Yes, etc.  There's never a perfect time to travel.  You just have to go.

Time for bed.  Four nights to Iceland!
Posted by Jake Cooper at 1:15 AM No comments:

Jake Cooper
I used to pretend - maybe many people do - that the moment you fall asleep, you wake up somewhere else. Usually the other me lived in a fantastical Persia, and was unaware that he was my dual. He also must've slept a lot.

(I was tickled to read, in Borges' short story Tlon: "Another believes that, while we are asleep here, we are awake somewhere else, and that thus every man is two men.")